I thought back to when I began a blog many years ago and how I started that blog. I had considered beginning this blog in a similar fashion; writing a few posts about my fucked up childhood, my promiscuous choices as a teenager, or even my dreadful first marriage as an adult. Instead, I am going to write about what makes me happy.

I am going to write about sex.

It was just three days ago that I had my first experience with being spanked. Now don’t get discouraged… don’t think I am claiming to be a slut, but am starting an entire blog writing about some measly spankings. I have been slapped around in the past, my ass has been wore out by men who think they have a killer back hand but instead of administering real punishment they literally make me giggle inside with each strike. I entertain them you see, because you will learn to know, I am a good slut. I will always do my best to fulfill the need, want or desire of any man I let take a turn on me.

This spanking was different and has opened an entirely new realm in my life. I was given many lashing with a belt, at the hand of husband Jon, whom I love so much.

It started like any other evening or time on camera, entertaining the amazing men I have an opportunity to experience on Streamate. It was at the request of “hf” that my husband take a try at hurting me. I will give my husband props for putting forth his best effort, but I have to be honest that I am eager to see how far I can not only push him, but how much more I can withstand.

I was on my hands and knees, bent over on the sofa. My make up was still in pristine condition, a dark lipstick extenuating the outline of my lips and just enough eyeliner to make it apparent that I am in fact easy. I had a pair of six inch nude patent leather stilettos on, a request from a fan. Outside of the heels and the slutty make up, I was completely naked. Bent over, my pussy wet, my nipples erect and my bottom lip in the grips of my teeth. Jon placed himself behind me, kneeling himself and putting one hand on either side of my ass. I could feel my ass hole stretch open and the draft of the air in the room meeting my pussy juices, sending a slight chill up my body.

Jon used force with each of his hands, spreading my ass and cunt as much as he could before burying his face in the middle of both. He slipped his tongue first as deep as he could inside my pussy, cleaning me out if you will with his mouth. I let out a faint moan and found myself losing my train of thought completely. I felt a tug as he had reached and fisted my hair in his right hand. He pulled my head back, arching my back and straining my neck… he leaned up, and put his mouth directly over mine. This position forced my mouth open, I caught his spit as he fed me my own pussy juice. I swallowed every drop, licking my lips clean as he released my hair and returned to fucking my holes with his mouth.

It was upon the request of a camera show viewer, “hf” as I referred to earlier, that what happened next… happened.

I heard my husband almost giggle if you will, as he read whatever it was on the screen of the chatroom on our camera show. I then heard the sound of leather and blue jean rub up against one another. It wasn’t a sound I was necessarily familiar with, but it was a sound that I feel anyone could identify. The sound your belt makes as you slip it from within your belt loops after a long day at work.

I didn’t even have time to process the sound that I had just heard, before a hand was wrapped around my neck. I was yanked upward to make eye contact with my husband, as he sternly said, “you are mine!”

It wasn’t seconds from the time he released his grip on my neck, to the time I felt the first echo of pain wrath through my body. He had just hit me, and hit me pretty hard I thought. It was stinging; the sting was rushing through my pussy, into my clit and down my legs. While I let out a faint whimper, my mind was racing so quickly that I couldn’t do anything but live in the moment. My elbows locked, attempting to hold myself up from ecstasy and pain running through me. I felt another blow to my ass, this time I lost my breath and let out a gasp. I felt my husband’s hard dick up against my cheeks at this point, I could tell that there most certainly was the small drops of precum moistening his boxers. One of my most favorite things. He thrusted into me, and then away, so this way he could obviously make for better aim.

I felt the sofa cushion release and he took a standing position over me. I knew I was in for more, but wasn’t going to let him win.

I look up at him and faintly whispered, “fuck you”.

Why I did this, I don’t exactly know. I may be what one would consider a “brat” in sexual terms? I wanted him to know, even with his weapon and the pain he was administering, that I was in charge.

Let’s be honest, I am always in charge.

He proceeded to hit me multiple times. I couldn’t tell if he was hitting me harder really; my ass had become almost numb outside of the blood that rushed through me with each blow.

I proceeded to shit talk. “You’re nothing but a pussy”… “and you hit like a bitch.”

He was requested by “hf” to fuck me. I have to admit, I don’t know that I had ever seen my husband so turned on before. He quickly removed his pants and bent over behind me. He placed his left hand gripping my ass cheek and his thumb rubbing over my ass hole. I felt his warm spit make contact with my hole, before he plunged his thumb deep inside me. In that same instant he reared back and struck me one last time with the belt. I moaned loudly, first pulling away from him before quickly backing myself toward him… I wanted more.

I could feel his energy, then I felt his dick. He thrusted himself inside me. It was as if I had no choice, or option. I was being owned. I was being fucked. It was only a couple of strokes in and out before I felt the belt loop around my throat. As he pushed forward with his hips, his cock inside me, he pulled back with the belt on my neck.

I could feel the blood leaving my head, lights flashing in my eyes. Those little stars you see when you stand too quickly sometimes, they were all I seen. I could barely breath and trying to say anything was not even an option.

His dick pumping inside me, I felt so full of his cock as the breath was leaving my body. I can remember faintly hearing him say those words I live for, “I am cumming”. It was in this moment that I lost consciousness. It was an out of body experience almost. It was like experiencing the most amazing high I could have ever imagined. I think now, maybe that rush is what the dope heads on “Intervention” are chasing with each hit of heroin. I can remember vividly how I felt during the moments that I wasn’t awake. I was in a dream, a dream of sexual ecstasy.

When I started to come to, my husband was standing over me, looking at me. I could feel the warm, thick cum dripping from my pussy. I could feel my pussy lips sore and swollen from being taken, taken and owned by his cock. My throat felt sore, but not nearly as sore as my ass. My ass… one could feel the raised bumps from all the lashings. It was red in color, which eventually turned to purple, almost black and faded into the green and yellow state of a bruise. It took about a week for all signs of punishment to dwindle from my back side. 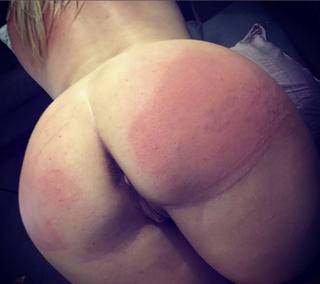 It was in that week that I became more and more grateful for the whipping I had received. I was so appreciative for that experience, the experience that both “hf” and my husband gave to me. Every time I rolled over in the night and woke from pain, I smiled and was full of warmth.

I love being a slut.

2 thoughts on “Where to begin…”